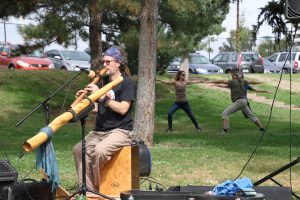 I am one of five people in The United States who currently holds a diploma in Vibrational Sound Healing from The Intercultural University of Mexico. As a student of Sound Healing Master and Tai Chi Master Marcelo Mansour, I was able to find a way to put the pieces I had discovered over four decades of delving, deeply, into music into practice. Marcelo has worked with Vibrational Sound Healing in hospital setting throughout South and Central America for the past 30 years. He has worked with Shamans and medical practitioners alike to develop a process for using sound to create a ‘multi-dimensional environment’ in which healing can occur. His practice had enough efficacy for a university program to add his methods to their curriculum, and to use his methods in the university hospital.

Before the days of medicine and surgery, people had to depend upon sound and movement to heal many of their problems. Sound and music are universal, and all indigenous healers use sound, singing and movement as part of their healing processes. There is a physical element of vibration in all sound, and there is a profound emotional connection to sound. 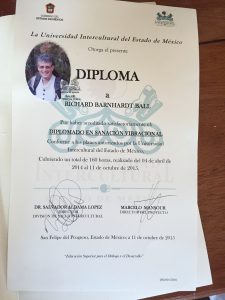 Shamans use drums, didgeridoos, singing and other sustained musical processes in their healing. I studied with Shamans in Native America, and studied with The Shamans of Tuva, and their unique styles of throat singing – in which the musician/healer can sing multiple tones at one time.

My teacher, Kongar-Ool Ondar is considered one of the top throat singers in the world. He has performed for The Dalai Lama, for audiences world-wide, and has played with and toured with top musicians – Like Paul Pena, Bela Fleck, Frank Zappa, Mickey Hart, and many more. He was my personal instructor and friend for over two decades.

In addition, I discovered other sound healing processes in yoga.

The yoga philosophers believe that everything emanates from sound. They believe that sound creates physical objects, that the universe came from sound, and that, in addition to healing, vibration is how we connect to each other, to the universe, to absolute consciousness, and to the source of all things.

I studied Mantra with Chaitanya Kabir, the chant master at Naropa Institute, and toured with him throughout the Denver/Boulder area for several years accompanying his kirtan chanting with flute. From there, I ventured into a deep study of mantra and meditation and was initiated into the ancient and very secretive practice of Nada Yoga with several masters, including Tantra scholar Mark Dyczkowski. One of the masters has given me permission to share this secretive practice with others. 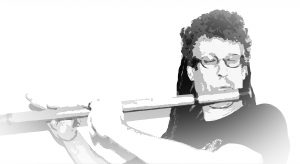 I met Marcelo one evening when he was doing a program in Evergreen. We had spoken and knew that we were working toward the same end. I went to his program, skeptical of the ‘dancing and moving’ piece. I prided myself on telling people that I joined a band early in life so that I could go to the party and not have to dance. I was going to meet Marcelo, check out his didgeridoo technique, and sit quietly in the corner. Within minutes, I was up and moving. My ego was put aside, and I felt a deep connection to music that I never had before. When the evening ended, I was ecstatic. And when Marcelo asked if I would be his student in the program at The Intercultural University of Mexico, I was all aboard.

Marcelo helped me put all the pieces I had been studying, which are mentioned above, into practice. In addition, Marcelo added the important components of Tai Chi – which I had studied for over two decades – and a hands-on healing process similar to Reiki – which I had also studied for several years.

For two years, I studied with Marcelo synthesizing all these skills I had developed, but had viewed as separate.

As a yogi, we also added in the practice of Mantra and Nada Yoga to build, slightly, on what I learned with Marcelo.

In tandem with yoga instructor Becky Myers – the two of us studied mantra together for several years – we now offer programs that being with learning about the healing practice of mantra, and then learning and chanting a mantra. We then move into a music and movement process in which I create a musical environment, and people move the ways their bodies inform them that they need to move to heal, physically, mentally, emotionally and/or spiritually. We ask participants to put their egos aside, to move and make sound, and the effects are, typically, stunning.

In addition to group sessions, I offer private sessions, which include the movement and music, and also include a hands-on healing session similar to reiki.

While Vibrational Sound Healing is a big buzz word these days, and many people who can play a bowl or turn on an electrical device are charging large amounts of money as ‘sound healers,’ I come from a background of being a studied, trained, recognized and degreed musician in many world traditions; from a long lineage in Tai Chi and Yoga; from decades of studying sound healing with Shamans from around the world; and hold a diploma from a world-renowed university in Vibrational Sound Healing. 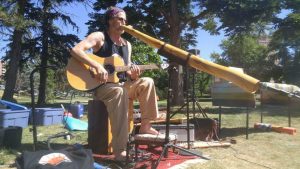